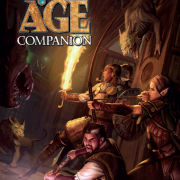 It seems like just yesterday I was wondering if this Y2K bug would indeed wreak global havoc (spoiler alert: it didn’t) while working on plans to start a new game company. Now here we are 18 years later and Green Ronin is still going strong. Although last year was challenging in many ways, we are starting 2018 in a great position. We have a bunch of projects nearing completion, fantastic new games in the works, and great prospects for the future. Today I’m going to talk about our plans for the next six months. I’ll then do another one of these in June to discuss the second half of the year.

Our biggest project this year is The Expanse RPG. We announced that we’d licensed James S.A. Corey’s terrific series of scifi novels last year and since then Steve Kenson has been leading the team designing the core rulebook. In a few months we will be Kickstarting The Expanse RPG and the rules will actually be done before we even start the crowdfunding campaign. The game uses our popular Adventure Game Engine, as previously seen in our Dragon Age, Fantasy AGE, and Blue Rose RPGs. We’re excited to take AGE into the future! The Expanse RPG will release in August, debuting at GenCon.

Want a new AGE game before the summertime? We’ve got you covered! Modern AGE launches in the Spring thanks to the hard work of Malcolm Sheppard and his team. The game lets you run games anywhere from the Industrial Revolution to the near future, with or without supernatural powers as you prefer. Concurrent with that we’ll be releasing the World of Lazarus, a campaign setting based on the amazing Lazarus comic by Greg Rucka and Michael Lark. Its compelling setting provides some timely commentary on current political trends and is a great place to tell stories. Fantasy AGE and Dragon Age fans will be delighted to hear that two long awaited books are nearing release. Jack Norris and his team have finished the Fantasy AGE Companion and Faces of Thedas and both are now in layout. The Fantasy AGE Companion is the first big rules expansion for FAGE, offering up many ways to expand your game. Faces of Thedas brings a plethora of Dragon Age characters from the video games, novels, and comics to life, and adds some great new rules for relationships and romance. Speaking of romance and fantasy, Joe Carriker and his team have been working on the next book for our Blue Rose RPG. Aldis: City of the Blue Rose is a comprehensive sourcebook about the capital of the Kingdom of Aldis.

We are kicking off 2018 with a bang with the release of the new edition of Freedom City, the signature setting of M&M since the game’s first edition. It releases to stores this week so now is the time to check out the city that started it all. Later in the Spring we’ll be releasing Rogues Gallery, a new collection of villains for your campaign. Crystal Frasier skillfully shepherded both of the books to completion, though they were begun by her predecessor. The first book she led from start to finish was actually the World of Lazarus but you’ll be seeing more of her vision of Mutants & Masterminds later in the year with the Basic Hero’s Handbook and Superteam Handbook.

Last year we hired Jaym Gates to start a fiction line for us, and this year her diligent work will pay off as Nisaba Press takes off. We will be releasing short fiction from our various settings monthly, and releasing two novels a year. The first will be Shadowtide, a Blue Rose novel by Joe Carriker. We’ll be following that up later in the year with our first Mutants & Masterminds novel.

At the start of this article I mentioned the beginnings of Green Ronin back in 2000. The company’s very first releases were Ork! The Roleplaying Game and Death in Freeport, a modest adventure that launched our longest running property. The new edition of Ork is finished and entering layout. It’s great beer and pretzels fun. Return to Freeport is a six-part Pathfinder adventure coming later in the Spring in which Owen K.C. Stephens and his team really captured the feel of the City of Adventure.

All good things must come to an end and such is the case with our beloved Song of Ice and Fire Roleplaying. Our license expired in 2017 so there will be no new material forthcoming. We can continue to sell the books we’ve already released, however, so those will remain available to those who want to adventure in Westeros. Our series of compatible Chronicle System PDFs will also continue, first with Desert Threats, a new collection of creatures. Some of the rules material from our last planned SIFRP book, the Westeros Player’s Companion, will be released under the Chronicle System brand with the Westeros specific content removed.

As you can see, we’ve got an action packed six months ahead of us. Later in the year we’ve got excitement like the Sentinels of Earth-Prime card game and the Lost Citadel campaign setting for D&D 5E. Thanks for your continued support! We really do appreciate it. Here’s to some great gaming in 2018!