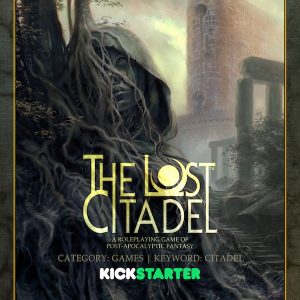 Please back The Lost Citadel on Kickstarter

When CA Suleiman and I discussed running a talent search in the lead-up to this project, we had high hopes for the number and quality of the submissions we would get and even though reading and evaluating those submissions in the couple of weeks between the submissions period and the Kickstarter itself was no small amount of extra work it was totally worth it!

As I said to everyone who submitted to our search: It was an absolute honor to be on the receiving end of such creative and lovingly crafted submissions. I was thrilled to see submissions coming in from around the world, from people with writing experience as journalists, novelists, comics writers, and narrative designers. We saw submissions from students of game design, hobbyists, GMs, LARPer, and roleplayers. It was a rich and competitive field and making the choice for who would be finalists was truly difficult.

After stripping the submissions and doing blind readings of the material, we narrowed the list down to five finalists before we moved on to choosing our winner. Or, in this case, WINNERS because when we got down to the final two our judges literally could not choose one over the other… which is what led us to choose TWO winners to put on the Lost Citadel project: Kate Baker and Anna Landin.

When we asked Kate what her reaction to the announcement was, she said, “I couldn’t believe it when the results were announced; I had to keep refreshing the page to make sure my name was really on there! With the first few people I messaged about it, all that I could manage to say was, ‘Eeeeee!’ I have since regained the ability to put coherent words together, but I am still incredibly excited to get to be a part of this project.”

Anna’s response was similar. “I was overwhelmed—and overjoyed!—to find out that I’d won. It’s an incredible honour to be chosen, knowing how much greatness there is to be found in the tabletop community. I’m thankful for the opportunity, and I mean to do my best to rise to the challenge.”

Make no mistake, folks, the fact that you have backed this project with so much enthusiasm from day one is the factor that allows us to make this move, to have this property we’re launching that in turn requires an adventure (and the authors to design it). I look forward to seeing how far we can take The Lost Citadel and I doubly look forward to getting down to work with Anna and Kate.

Kate Baker played her first tabletop RPG about five years ago, and immediately fell in love with the hobby. Now she loves introducing new people to gaming! She got interested in writing her own RPG content about a year and a half ago. By day, she’s a mild-mannered engineer. She lives with her husband and a very silly hound dog.

Anna Landin is a Swedish comic artist, illustrator, storyteller, and builder of imaginary worlds. Currently engaged as the artist for the Rusty Quill Gaming Podcast, her work has also been published in the Enough Space for Everyone Else anthology, and can be found on covers for the horror-fantasy webcomic I, Necromancer. When not day-dreaming about the imaginary geography of unreal worlds and drinking more tea than any one person rightly should, she can be found collecting dice, drawing witches, or working on her own webcomic, Grassblades.