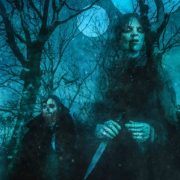 In this week’s Lost Citadel RPG blog post, we’re talking a bit about the most omnipresent facet of life in the world’s last city of the living: the Dead.

Ultimately, the Dead are the proverbial barbarians at the gates. The rising tide. The outside. The other. The reason Redoubt is what it is, and why escaping or changing it is no easy feat.

Across Redoubt, the prevalent general term for corpses that rise beyond death is simply “the Dead.” The most common street/nickname for the most numerous category of undead (those that continue to decompose after rising) is “rotters.” Other terms for these creatures exist, of course—different cultures, religions, and people have contributed different epithets over time. Some of the most common include:
– Revnants
– The Restless
– The Fallen
– The Damned

Some are fresh corpses, almost mistakable for living beings (however briefly). Others are little more than skeletons, strung together with fraying tendons and leathery strips of flesh. Most fall somewhere in between; the traditional ragged, rotting, often wounded, shambling corpse.

Which brings us to one of the most important traits to keep in mind about the undead of Redoubt: They vary. Some are slow, stumbling; some are surprisingly fast and agile. Some are strangely weak, dangerous only in numbers (or to the unprepared), while others display the strength of many men.

Some variation applies to their level of sentience, too, albeit to a much lesser extent. Some are completely mindless; they know absolutely nothing but “move forward and consume,” utterly unaware of outside stimuli unless it provides a target or an obstacle. Most seem to have roughly the sentience of a small predatory animal; they’re capable of very basic decision making, and can recognize obvious threats. Some can form very basic plans, proving cunning enough to use tricks such as playing dead, or to use/improvise basic tools and weapons. And some have just enough sentience to be actively cruel and malevolent.

What seems certain is that all the undead are driven to kill and to consume, by their nature, but it’s equally certain that some seem to enjoy causing fear and agony before the end comes.